California’s attorney general Kamala Harris on Friday threatened legal action against the ride-sharing tech company Uber unless it “immediately” removed its self-driving vehicles from the roads in San Francisco.

The threat from the office of the outgoing attorney general was contained in a letter released to the public Friday shortly after Uber declared it would defy state regulations, a move the company said was “an important issue of principle”. 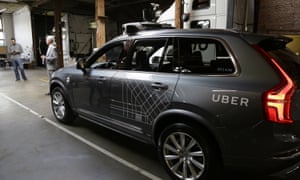 Twenty companies have been approved to test self-driving cars in California, according to the department of motor vehicles (DMV). Uber is not one of them, and the company is refusing to abide by the same rules as its rivals – a defiant move that critics argue shows disregard for the law and public safety.

Friday’s development portends a dramatic confrontation between Uber and California state officials, amid mounting anger in San Francisco at Uber’s refusal to abide by the same rules as other companies.

Harris, a rising star in the Democratic party, was recently elected to the US Senate. The letter from attorneys in her office said they were acting on a request from California’s DMV.

The DMV ordered Uber to either remove its self-driving cars from the road or obtain a permit on Wednesday, the first day the company began a trial of its self-driving taxis in San Francisco without permission.

The letter warns that if Uber does not remove the vehicles from the road until it obtains a permit, the attorney general will “seek injunctive and other appropriate relief”.

Earlier Friday, Uber made clear it had no intention of backing down.

Anthony Levandowski, the head of Uber’s autonomous vehicle program, said the rules did not apply to the company’s fleet of vehicles because of its particular form of technology.

“We cannot in good conscience sign up to regulation for something we’re not doing,” he said.

“It’s an important issue of principle about when companies can operate self-driving cars on the roads and the uneven application of statewide rules across very similar types of technology.”

Levandowski added: “You don’t need a belt and suspenders … if you’re wearing a dress.”

Uber’s defiant stance appears to be setting the company on a collision course with California regulators in court.

“If Uber does not confirm immediately that it will stop its launch and seek a testing permit, DMV will initiate legal action,” the DMV told Uber in a letter this week.

The requirement to seek a testing permit for autonomous vehicles did not apply to Uber’s cars, Levandowski argued, because the company’s cars were not capable of operating without being controlled or monitored by a human operator.

The first known death caused by a self-driving car occurred in May 2016, in a Tesla car using autopilot. Unlike Uber, Tesla is one of the 20 companies that has been issued a permit to test autonomous vehicles in California by the DMV.

Uber began using autonomous vehicles to pick up fares in Pittsburgh in August. The city is home to Uber’s self-driving-car research facility, and the pilot program was met with enthusiasm by local officials.

But in San Francisco, the pilot program has so far been a public relations catastrophe.

Two self-driving Ubers were observed running red lights on Wednesday, the first day of the pilot. The company blamed the traffic violations on “human error” and has suspended the drivers involved. However, the company was not asked about the red light violations during a conference call with reporters Friday and has not responded to follow-up questions seeking an explanation.

“Those vehicles are not yet ready for our streets,” he wrote.

San Francisco mayor Ed Lee, who is generally a strong ally of the city’s technology companies, “expressly warned” Uber CEO Travis Kalanick to remove the cars from the road in a telephone call Friday, according to the mayor’s press office.

“Uber is failing to be a respectful civic partner to the city of San Francisco by choosing to put Uber’s self-interest before the safety of the residents of their home town,” Ellen Canale, a spokeswoman for the mayor, said in a statement.

In a blogpost published Wednesday, Levandowski argued that whether the company needed a permit from the state was a matter of “debate”, adding that Uber had “looked at this issue carefully” and determined that a permit was not necessary since its cars would still have human drivers monitoring them.

Levandowski also appeared to argue that the state of California, home to Silicon Valley, should amend its regulations to accommodate Uber, noting that other states had regulations that “made clear that they are pro-technology”.

The conflict has exposed what critics say are the unethical and illegal tactics that the company has consistently used to grow its business. After the controversial San Francisco launch, consumer advocates in California urged law enforcement to impound the self-driving cars and file criminal charges against Kalanick for violating DMV requirements.

“It’s an outrageously irresponsible position,” said John M Simpson, privacy project director with Consumer Watchdog. “The DMV should immediately seek an injunction, and Uber’s executives should be prosecuted to the fullest extent possible under the law.”